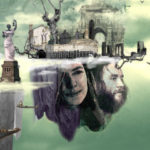 E.W. Harris and Jo Kruger have come together to form a new ensemble, Caves & Clouds, a collaborative outgrowth of the Big City Folk collective in New York City.  They are currently raising stake funds with Indiegogo for their debut record, The Winter of Our Discontent and the follow-up touring schedule.

-Jo’s story growing up as a musician and how she got connected with the Big City Folk collective.

-How each of them has been trying to work with the other for a long time and how excited they are to finally get a collaboration going.

-The importance of collaboration in an uncertain political climate and artists’ responsibility to bring something new or positive to the table.

-The inciting incident that sparked them to finally collaborate.

-Some of the pitfalls and stereotypes of the acoustic singer/songwriter.

-Some of the reservations that came before launching their Indiegogo campaign.

-How backers of a project feel as if they are a part of the project as it is created.

-Dealing with the inner critic, especially when the creative process starts to flow so naturally.

-Taking your life-long battle with Resistance one day at a time.

-Dealing with hyper-focus on certain things to the extent that other important things lose all of your focus.

E.W. & Jo’s Final Push will inspire you to just do it, in all aspects of your life, to embrace and welcome failure as a part of life, and to trust the people inside of you and out who believe in you.

“I’ve been running around the scene here, admiring E.W.’s projects for a long time, and there are very few people who are hailed with as much respect in that songwriting scene.”

“It made it a really optimistic endeavor in a pretty nihilistic time.”

“We are not a team to be sneezed at when it comes to the kitchen.”

“It’s almost like antibiotic resistance.  When you start to find ways to evolve around that silly voice, that silly voice finds a way to evolve too.  It finds new dick moves to get in your way.  And for me it comes when I try to do something new, because it can put a new face on old doubts.”

“Do what you can do to get past it for the day.  It’s just a matter of one day at a time.  It’s almost twelve-steppy in its zen-ness.”

“I feel like the only thing within my power to do is to cooperate with people.  To try to participate in ideas rather than just do my thing.”

“You’re throwing us a Hail Mary, it’s the least we could do to catch it.”

“I wouldn’t find any value in this thing that I was doing if I was living in a cave on my own.”

“Coming out of your own fantasy and trying to find that Venn diagram where it meets everyone else’s fantasies.  Reality is that sliver in-between.”

“Some of my harshest critics have been some of my greatest teachers.”

Caves & Clouds: The Winter of Our Discontent Indiegogo

What horror movie (or awkward comedy movie) or character do you liken your Resistance to?  Is it Michael Myers relentlessly coming to get you, even after you’ve chopped his head off?  Is it like having an awkward weekend with your father in law?  Join that discussion at the Facebook group!