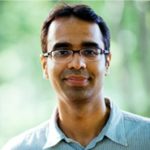 Karan Bajaj is a #1 bestselling Indian novelist with more than 200,000 copies of his novels in print, both optioned into major films. Karan‘s first worldwide novel, The Yoga of Max’s Discontent, will be be published by Random House on May 3rd‘ 2016. The book was inspired by Karan‘s one year sabbatical traveling from Europe to India by road and learning yoga and meditation in the Himalayas.  Karan has also worked in senior executive roles at companies like Procter & Gamble and the Boston Consulting Group and was named among Ad Age’s “Top 40 Under 40 executives” in the US.

THE YOGA OF MAX’S DISCONTENT is about a Wall Street investment banker who becomes a yogi in the Himalayas and is both a page turning adventure through the hidden underbelly of India and a contemporary take on man’s classic quest for transcendence.  The book is receiving excellent advance reviews with The Daily Telegraph calling it “The greatest adventure of our generation” and Sharon Gannon saying it’s “A superb meditation on effort and grace, on the level of Herman Hesse and Victor Frankl.”

You can get a free meditation course, a Quit Sugar in 7 days nutrition guide, a yoga flow video course and other gifts worth $299 when you order your book today. Details at www.karanbajaj.com/yogamax

-The joy and inspiration that comes from seeing yourself on a hero’s journey.  Even if you don’t reach the goal, the act of trying is a success.

“It’s not like some instant moment of enlightenment.  You start understanding the endlessness of our thought waves.”

“I almost feel that every artist is creating out of a sense that this world is incomplete and they need to create a more complete and idealized version.  Art fixes the world for me.”