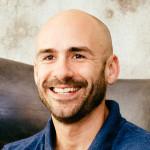 Victor is a Research Director at a Philadelphia-based digital design and development firm. He regularly writes and speaks on the application of psychology to design. He has written for A List Apart, Smashing Magazine, UX Booth, User Experience Magazine (UXPA) and many more. Victor is the author Design for the Mind, an upcoming book on the application of principles of psychology to design.

In this episode, Victor discusses:

-His first creative moments, and how his interest in writing began.

-How sharing your work can build your confidence… or help you to realize that you have a talent in the first place.

-How people can surprise you with the amount of support that they can offer.

-Some things in his early life that held him back from being creative.

-The way that alcohol entered his life as a ritual for him to pass time on a nightly basis.

-How once he stopped drinking, writing replaced that need and it came crashing down like a dam suddenly let loose.

-What led to him getting to the point of hitting “rock bottom.”

-His “coming out” article and how it affected so many people in the industry.

-How his boss was shocked when he told him about his alcoholism, and how telling that is in terms of how easy it is to hide things like alcoholism.

-Some of the issues that he is now attempting to address dealing with the culture of workplace drinking.

-How you don’t need to get punched in the face to need to make a change in order to become the better version of yourself.

-How he doesn’t believe that things necessarily get easier, just different.

-You need to let go of worrying about how something is going to be received when you put it out there.

-Look for little wins and build upon them.

-How the simple act of starting to do something gives you expertise, and you can begin teaching at this very early point.

Victor’s Final Push will inspire you to take that first step and replace the negative habits in your life with positive, worthwhile habits.

“On my way to passing out I would always have this thought of, ‘Tomorrow it will be different.  Tomorrow I will start writing my book.'”

“The drinking was preventing me from writing.  But in the back of my mind I felt like the drinking was inspiring me because I’d have these thoughts at the end… ‘you should write.  I want to write.’  But I would wake up without another word written.”

“Fifteen years of holding back the dam on writing just came crashing down as soon as I was able to stop drinking.  I haven’t been able to stop writing since then.”

“Like a rocketship, things started to get better once I was sober.”

“I replaced drinking with writing.”

Victor’s upcoming book, Design for the Mind (use the coupon code for 39% off: yoccopcycp)

The UX of Alcohol Abuse: Reflections on a Year of Sobriety (Victor’s article for Model View Culture)

Youngman’s Words + Music video having to do with alcoholism