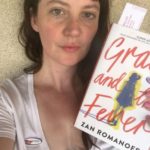 Zan Romanoff is a writer of essays and fiction, mostly focused on food, feminism, television and books.  She graduated from Yale in 2009 with a B.A. in Literature, and now lives and works in Los Angeles.  She is the author of A Song to Take the World Apart, and her latest YA novel, Grace and the Fever.

In this episode, Zan discusses:

-How writing has played a part in her life since she was very young.

-The unexpected result of one of her pieces ending up in The Paris Review.

-How she tricked herself into writing her first novel.

-The idea of wanting or needing permission from other people to call yourself a writer.

-Talking about your creative passion with other people and wanting to protect it from scrutiny, jokes, or small talk.

-The similarities and differences between writing and therapy.

-How she wants to be honest with her young audience so that they trust her.

-The process of writing her third novel.

-How ideas often come to be in strange or long-winded ways that don’t make sense.

-The notion of “coming down with a book.”

-Giving yourself permission to spend time with yourself and be creative without thinking of those end goals.

-How selling her first book didn’t solve any problems for her or make her doubt herself any less.

-Trusting that your creative successes aren’t flukes and knowing that more successes will come again.

Zan’s Final Push will inspire you to GET OUT OF YOUR OWN WAY and give yourself permission!

“What’s the thing that I wake up every day and do even though I don’t have to and even though nobody wants me to?  And the answer was writing.”

“The only thing scarier than writing a novel is permanent unemployment, I would say.”

“External permission is important but it only gets you so far.  Their permission opened a door and I had to sit with it for a long time.”

“I do feel strongly that one of the major differences between me and people that haven’t written books is that I sat down and wrote it.”

Zan’s piece in The Paris Review

A Song to Take the World Apart by Zan Romanoff

Grace and the Fever