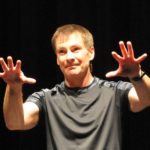 Jeff Wright is a storyteller and a podcaster.  He specializes in “edu-tainments”: storytelling with depth and message AND presentations enriched through entertaining story.  His podcasts, Odyssey: The Podcast and Trojan War: The Podcast are now available everywhere.

Jeff’s live show, “A Whack on the Side of the Head: A Concussion Story” tells the autobiographical story of his personal journey through concussion and invisible injury.  The one-hour show comes complete with Jeff’s amusing anecdotes, good humor, insightful take-aways, and inspirational messages.

In this episode, Jeff discusses:

-How he got interested in theater and public speaking.

-Dealing with the unrelenting standards placed upon him by other people and eventually by himself.

-How suffering from a concussion changed the trajectory of his life.

-If some major life issue forces you to start from scratch, build on something that you are already good at.

-How the Greek Epics were what “stuck” for his lectures.

-Transitioning from a full-time teacher to a shorter-term guest speaker.

-The changes that he had to make in his presentation when he took his “act” from small classrooms to large auditoriums.

-Watching tapes of himself and evaluating, but not being too critical.

-Gaining power over your demons or monsters by learning their names.

-Using a damaged brain to try to figure out what was wrong with his brain.

-The unfair feeling of wanting to justify his invisible injury to other people.

-How we overly value the negative reviews and comments.

-Not being able to see his audience due to bright lights (and having no physical audience during the podcast).

Jeff’s Final Push will inspire you to realize that shit happens.  Don’t deny it.  Don’t try to go it alone.

“I think an awful lot of creative people or high achievers get so much of their self-concept tied up in the work that they do.”

“The thing about these stories is that they’re humanities original Game of Thrones.”

“When some life event throws your life off of its nice intended tracks, if you can build on something that you know you already do well and you are passionate about, then at least you have a few aces in your hands as you start on the parts that are going to be new and difficult for you.”

“The journey to success is paved with failures.”

“When shit happens and your life is turned upside down, don’t deny it.  Don’t try to go it alone.”

How to Make Love in a Canoe