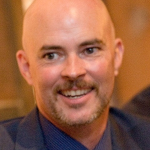 “The idea is not just to exterminate this writer’s block but to engage it in dialogue.  I actually mean that quite literally.”

“The first creative act is reinventing yourself.  Creating your new self as an artist.”