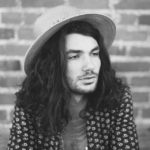 “When you put a lot of time into something that you really love, it’s not work.  It’s like you’re having fun.  You’re playing with it.”

“I think it was a massive amount of insecurity.  I never imagined myself being a singer.  I never even sang in the shower.”

“You’ve just gotta put yourself out there.  It’s less a confidence and moreso a carelessness.”