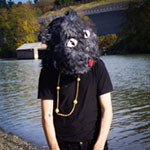 Edward Westerhuis is a multidisciplinary artist based in Vancouver, British Columbia. His work moves between visual art, video, and performance–often collaborating with other artists and working within the community. He creates imaginative worlds that play with an epic sense of scale, forming allegories that reflect the places he lives. Whether he’s making sci-fi cardboard puppet shows, or music videos with giant dancing cats, Edward uses humour to create the unexpected and to carve out space for new perspectives. Edward has presented his work across Canada, from coast to coast, including the Yukon Arts Centre, the Banff Centre, and the National Arts Centre in Ottawa.

In this episode, Edward discusses:

-How he got started down the creative path that got him to the point he is at now.

-How he came up with the idea for his “Double Cat” video.

-The deeper meaning behind the “Double Cat” video.

-His Tedx talk and the differences that performance art brings to the creation process.

-The hilarious story of one of his first creative moments.

-The creative lull that came into his life when he moved back home from school and how he got past it.

-The power that comes with mapping your creativity out to find out what works for you.

-Moving around, taking a walk, or doing some “lighter” creative work in order to clear your head when you need it.

-The idea of taking the pressure off of yourself by not worrying about the final product.

-One of his lowest moments, when he attended a film festival while in a creative drought and feeling like an imposter.

-The way he got out of his drought by working as Sook-Yin Lee‘s Director’s Assistant.

-How Sook-Yin Lee was a role model for him and gave him the courage to be able to move between disciplines and art forms.

-How he likes when art can bring people together to form new types of interaction around the artwork.

-What art and creativity bring to his life.

Edward’s Final Push will inspire you to find ways to shut out the anxiety of being overwhelmed by your creative end goal.

“Over time, I’ve been able to recognize my own process and see how you develop an idea from a glimpse of an image to a fully thought-out project.”

“It was this slow-burning idea that was just creeping over time.”

“When I work on a desk, I can’t have anything on my desk except for what I’m working on that very moment because I get way too distracted.”

“You’re always trying to remove the anxiety from your process.  You don’t want to be anxious while working because then you just get suffocated.”

“When I’m making art now, I really think about my audience.  I think about creating opportunities that exist outside the artwork itself.”

“I really love the opportunities for the face-to-face social interaction that can happen around artwork.”

“One of the reasons why I love collaborating so much is because I can see people on a much deeper level.  We are able to build a communication that is very specific to an art piece but also has reverberations beyond that on a human-to-human level.”

“Don’t make it so big.  Make it small and make it an opportunity to learn about who you are.”

“Find ways to shut out the anxiety of being overwhelmed by that end goal.”

“Allow yourself to explore and embrace not knowing where you’re going.”

“The Creative Habit: Learn It and Use It for Life” by Twyla Tharp

“Letters to a Young Poet” by Rainer Maria Rilke