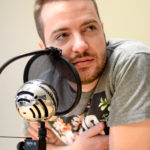 Only, like, two episodes after the last episode about magic.

Except not!  Something incredible happened after the last episode… Youngman goes as far as to describe it as “magical,” believe it or not.  This episode starts where the last episode left off, though it wasn’t planned that way.