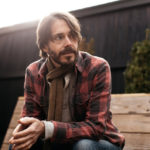 Glen Phillips is an American songwriter, lyricist, singer and guitarist, who is best known as the singer and songwriter of the alternative rock group, Toad the Wet Sprocket.

This episode features songs from Glen’s latest solo album, Swallowed by the New, which is available everywhere music is sold (and links below).

In this episode, Glen discusses:

-The story of how Toad the Wet Sprocket started.

-How he originally wanted to be a teacher and didn’t think that he had the ego or the thick skin to be a professional performer.

-His thoughts on religion, spirituality, and his desire to reclaim the word “God” for himself.

-The importance of being grateful.

-The singing circles that he is taking a part of and the sense of community that it has brought to his life.

-His take on the purpose of music and how it is not about one person singing and everyone else listening.

-His attempt to be vulnerable and share his pains so that it can act as a tool for other people.

-How he felt miserable for years in the role of provider that he put upon himself.

Glen’s Final Push will remind you to do what you do BECAUSE YOU LOVE IT!

“I just feel a great compulsion to give thanks.”

“Everyone came in here, ready to wake up and the music is serving as this solvent to take away all this stuff that’s secreted over everyone’s soul and kind of free them up for a moment.”

“Music is not about being the star.  It’s about sharing and losing yourself in the song and ceasing to exist for a moment and realizing that you are a part of something larger.”

“The happiest people I know are the hardest working.”